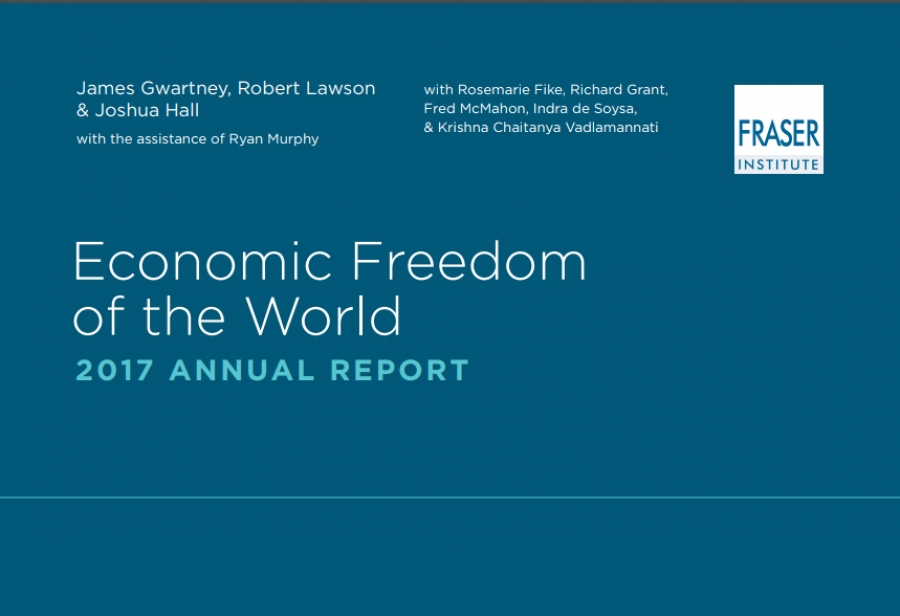 Greece ranks 116th among 159 countries according to the “Economic Freedom of the World: 2017 Annual Report” which was released by the Fraser Institute in Canada, based on data collected in 2015.

On Friday, September 29, Center for Liberal Studies Markos Dragoumis (KEFiM) held a press release in TITANIA HOTEL, to present the results of the study. The events speakers were Panagiotis Pikrammenos (former Prime Minister of Greece, former president of the Council of State), Aristidis Hatzis (Professor of Philosophy of Law & Theory of Institutions) and Alexander Skouras (President of KEFiM).

In comparison to last year’s index, Greece dropped 27 positions, which is mainly the bold impact of the 2015 capital controls. According to updated figures of 2015, our country is now between Nigeria (114) and Bangladesh (117) in terms of economic freedom. Greece holds the worst position among all EU members, as well as among countries of the Southeastern Europe.

It is important to highlight the fact that Greece is among the five countries with the largest declines compared to last year, along with Venezuela, Argentina, Bolivia and Iceland. This fact becomes even more significant, considering that four out of five countries with the highest-ranking improvement are in our wider neighborhood (Romania, Bulgaria, Rwanda, Albania and Cyprus).

Hong Kong once again tops the index, with Singapore, New Zealand, Switzerland and Ireland completing the top five. Venezuela holds the last place out of 159 countries.

Read the entire “Economic Freedom of the World: 2017 Annual Report”

The degree of economic freedom is calculated based on the ways institutions and policies are implemented in each country regarding five areas: the size of the government, legal system and property rights, sound money, freedom to trade internationally—freedom to exchange, and the regulation. Major researches published in leading scientific journals have demonstrated that people living in countries with high degree of economic freedom enjoy a higher level of prosperity, have wider political and social rights and longer life expectancies.

With great success and plenty of participation, KEFiM in collaboration with the European Liberal Forum (ELF) and the Friedrich Naumann Foundation for Freedom (FNF), organized the […]